Entrance to Sterkfontein Caves, Down in the Caves, Parts of interpretive displays at Sterkfontein and Maropeng respectively.
Currency Converter

Price Per Extra Adult More Than 2

Is “The Cradle” where it all started?

To the west of Johannesburg where the Highveld starts its descent to the “Bushveld” from the gold-bearing ridge of the Witwatersrand lies an area of undulating hills referred to as the Cradle of Humankind. It gains its name from the huge amounts of fossil remains of early man and our more apelike ancestors discovered here in the dolomite caves just beneath its surface. The unusual geology of the region has made it one of the richest fossil-bearing regions in the world not just of early apemen but many other extinct creatures.

The most famous of the caves where the first fossil discoveries were made and continue to be made are at a place called Sterkfontein. It is a must when in this region to visit these caves. There are guided tours down into the caves every half an hour. At the start of the walkway leading to the caves, there is a reception area with a small restaurant and very informative interpretive centre. Built to give an open view of the “veld” it is a very pleasant place to enjoy a coffee and small snack before continuing on your exploration of the region.

To attract more visitors to the area another site has been created at Maropeng to the north. At Maropeng inside a great hollow mound is a presentation on the history and prehistory of our species. It is very popular with the busloads of school children that visit the area. But the interactive displays fascinate both old and young. From the top of the mound are wonderful views of the countryside as far as the Magaliesberg Mountains. There is a restaurant for light meals, curio shop and footpaths have been laid to explore the “highveld” grasslands surrounding the venue. 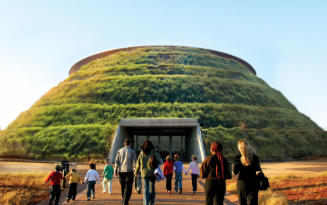 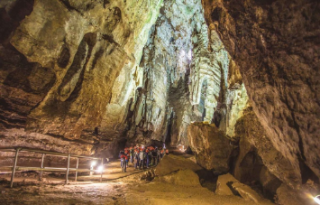 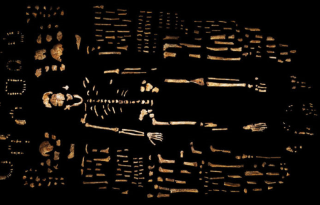 Extended day, combine with one or more of the many regions attractions

Within easy reach of the Cradle of Humankind are most of the region’s major attractions. So while in the area it is wise to consider adding some of them in combination on a day or two or three outings. Consider staying in the area rather than in central Johannesburg and you are welcome to consult us for recommendations at various levels of affordability.

To the northeast situated on some high “koppies” is the Rhino and Lion Game Reserve. Here roaming free are Rhinoceros, many antelope species including the rare Sable, Zebra, Warthog, and many smaller mammals. In separate “mini reserves” are Lion, Cheetah and African Wild Dog. There is a licensed restaurant at the centre of the reserve where you can stop for lunch in between viewing the game and the distant views of Johannesburg from the top of one of the koppies. This reserve is an excellent opportunity for the hurried visitor to Gauteng to see some of South Africa’s famous fauna.

Across the road in a series of ponds formed by a small river you can leisurely view Hippopotamus’ wallow. Also on view are some exotic species of tiger; which of course are not indigenous but you can use the opportunity to compare to its native cousins the Lion and the Cheetah.

Inside the reserve are the Wonder Caves with very impressive underground caverns and containing some of the most impressive stalactites and stalagmites in South Africa.

To the north as one leaves “The Cradle” and descends to the foot of the picturesque and incredibly ancient Magaliesberg mountains you will find the Village of Lesedi. Here members of the various ethnic groups that make up the population of South Africa display their traditional way of life and culture in a wonderful three-hour show that includes an optional African Banquet.

A little further on one reaches the shores of the Hartebeespoort Dam a huge manmade lake formed by damming the Crocodile River at the gap or pass in the mountains called after the Hartebeest antelope. This whole area is an attractive weekend playground and retirement region for the cities of Johannesburg and Pretoria. A bridge or causeway leads one across the dam to one of the few gaps in what appears to be the impenetrable ramparts of the Magaliesberg. Through this pass in the mountains called “Kommando Nek” by the Boers during the Anglo Boer war one descends to the warmer climatic zone of the bushveld. Nearby is a huge craft market with arts and crafts from all over Southern Africa and short distances to the west and to the east lie the Elephant Sanctuary and the Ann van Dyk Cheetah Centre, The Lion Park and The Rhino and Lion Reserve all worth a visit. Also worthwhile is the short drive that takes you back through the mountains and across the dam wall which gives views of the deep gorge carved by the Crocodile River.

Applicable extra entrance fees per person plus extra time charges above 8 hours ( length of standard day tour) can apply. Please click on Book/Enquire on this page and let us know what you would like to do.

There are many excellent restaurants and hotels in the region. So why stay in the traffic? Contact us about attractive stays.

Pick up and drop anywhere Johannesburg/Pretoria/Airport.

Groups of 4 or larger please contact us for a quotation.

Free Mineral water included on all our trips!